Blood Sonic came from the negative energy from Sonic after he went Hyper for a second time. (in anyone's Contituity)

Blood Evolved in the same ways Sonic has and then some. He cannont be sealed away any where due to the fact that he is not a being of anysort, Blood Sonic is unstoppable in any way. He is considered the ultimate ememy. But he doesent kill.

He is kinda like Mephiles but actually is linked to his Good Counterpart. He also takes from Cell, Blood Sonic must join with Sonic again but through Dark Union. He also drains energy from his fallen enemies.But, If Blood Sonic Dies/Sealed Up Sonic Will Never Go Hyper (or Above the main Super Forms Excluding the Story Book Forms) Ever Again. And if Sonic Were to die Blood Sonic will Acheave his Final Form.

In Chaos Quest he finds the heroes after joining up with Sukundus for his own pleasure. Sonic cannot asorb him. If he does then Blood Sonic will become nearly unpstopable. in the following episode Blood Sonic Gains his Final Form after Sonic's Body and Mind is taken over by his enfulence.

Blood Sonic in Chaos Quest has only 3 weeknesses

Apallo and Isaiah are the only ones who can stop him for good. Celia The Pixiehog Sacrificed her self in order to finally defeat Blood Sonic while Freeing Sonic from dieing with Blood Sonic at the last second. 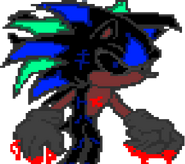 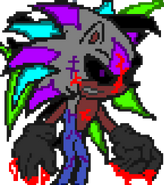 Blood Sonic's True And Final Form- He Optains This Once he Rejoins With Sonic.His Way
Add a photo to this gallery
Retrieved from "https://blurayoriginalsspecialsite.fandom.com/wiki/Blood_Sonic?oldid=6968"
Community content is available under CC-BY-SA unless otherwise noted.